The CEO Mechanic is a standalone book in the Bindarra Creek Series. Set in a struggling rural country town, it’s a romance with a difference. 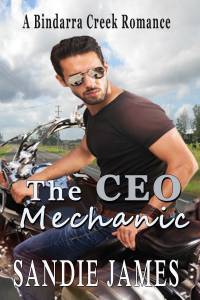 Can the small town of Bindarra Creek erase the demons from his past and help him find love and forgiveness?

Struggling to come to terms with the guilt of his younger brother’s death and the resultant media attention, Mac Stafford heads to the country for solitude. Hopefully, the small town of Bindarra Creek will offer the peace he craves. He takes on the job of mechanic at the local garage as a challenge to get the struggling business back on its feet.

However, nothing keeps the demons away at night.

After being summoned home by her father, Brook Fairfax arrives in Bindarra Creek and finds herself instantly attracted to the town’s new mechanic. Her feelings deepen when Mac shows a kindness to Brooke’s younger brother who is a Down syndrome child.

She has little faith in men after discovering her ex-boyfriend only dated her to better his position in her family’s business. And let’s face it her father and older brother do little to improve her view. But, surely a man who demonstrates such compassion to Davey has the honesty they lack?

When she discovers Mac has lied and not confided in her with the truth, her trust in him is shattered.

Working together for the good of the town gives Mac an opportunity to demonstrate his integrity to Brook; but can she let go her prejudice and believe in his love?

Buy from Amazon: AU; US: UK